For Forward Travel Director, Rose Toohey, travel is more than a job… it’s at the heart of who she is. Rose started her travels backpacking around Australia at 17, and is now rediscovering the beauty that lies in our own backyard.

Rose has always preferred exploring nature and scenery than crowded cities so in July she headed west on a NSW road. She found some of the most remote and interesting places in the south and outback NSW, and became transfixed by the flat earth and endless sky. Here she shares the skies and highs of her trip. 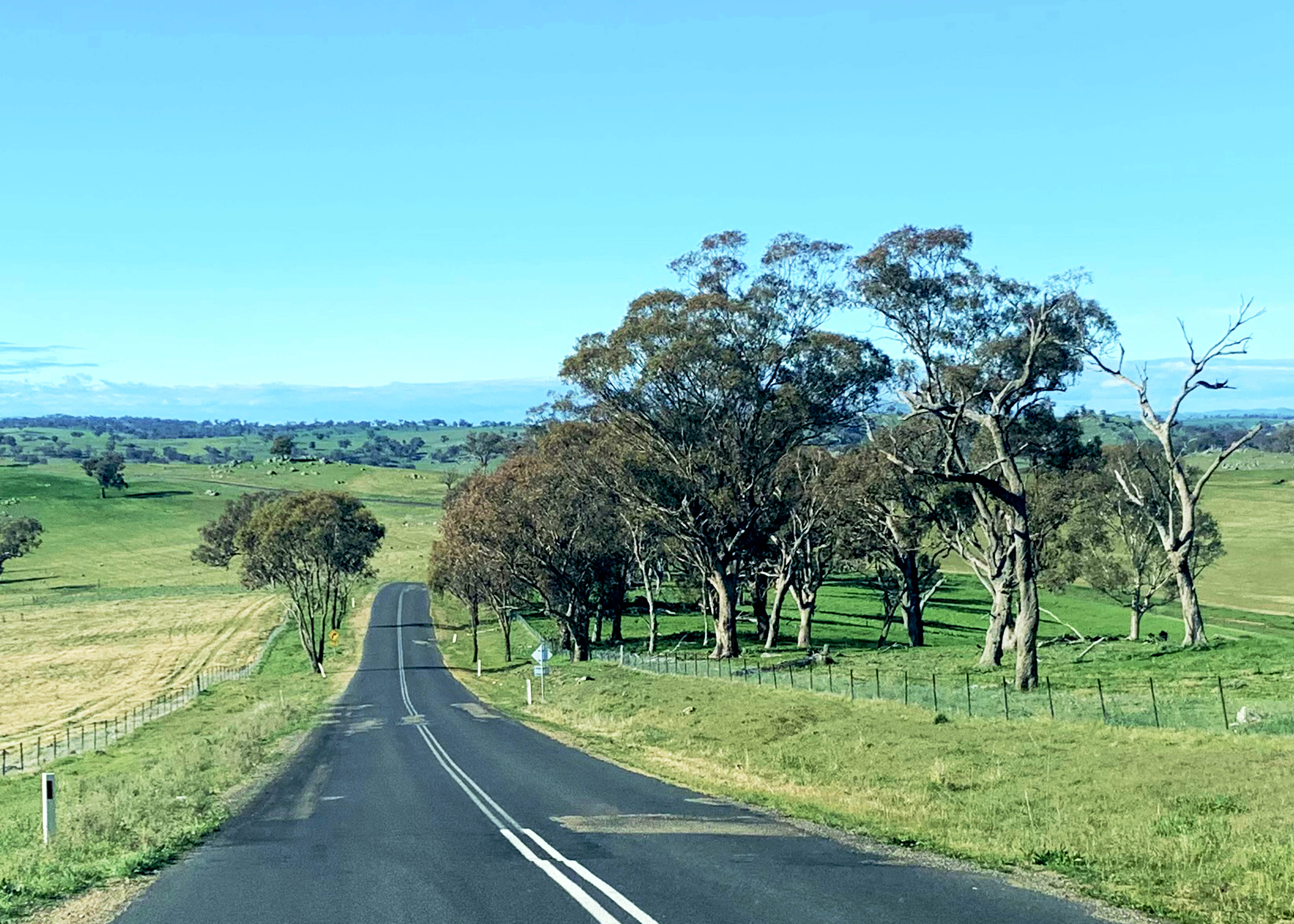 Now is the time

“Mungo National Park has been on my bucket list for many years. But 1,200km seemed so far to go. Ironically, I never thought twice about flying 12,000km to travel in South America… always thinking NSW could be done later.

When the borders closed, a NSW road trip seemed the perfect way to start exploring Australia again.  So, out came the maps.

My partner, his 13-year-old son and I each picked places we wanted to see and we plotted our course. Our NSW road trip took us from Sydney to Gundagai, across the Hay Plains to Wentworth and up to Mungo. We came back through Griffith and added a special detour to Cootamundra. 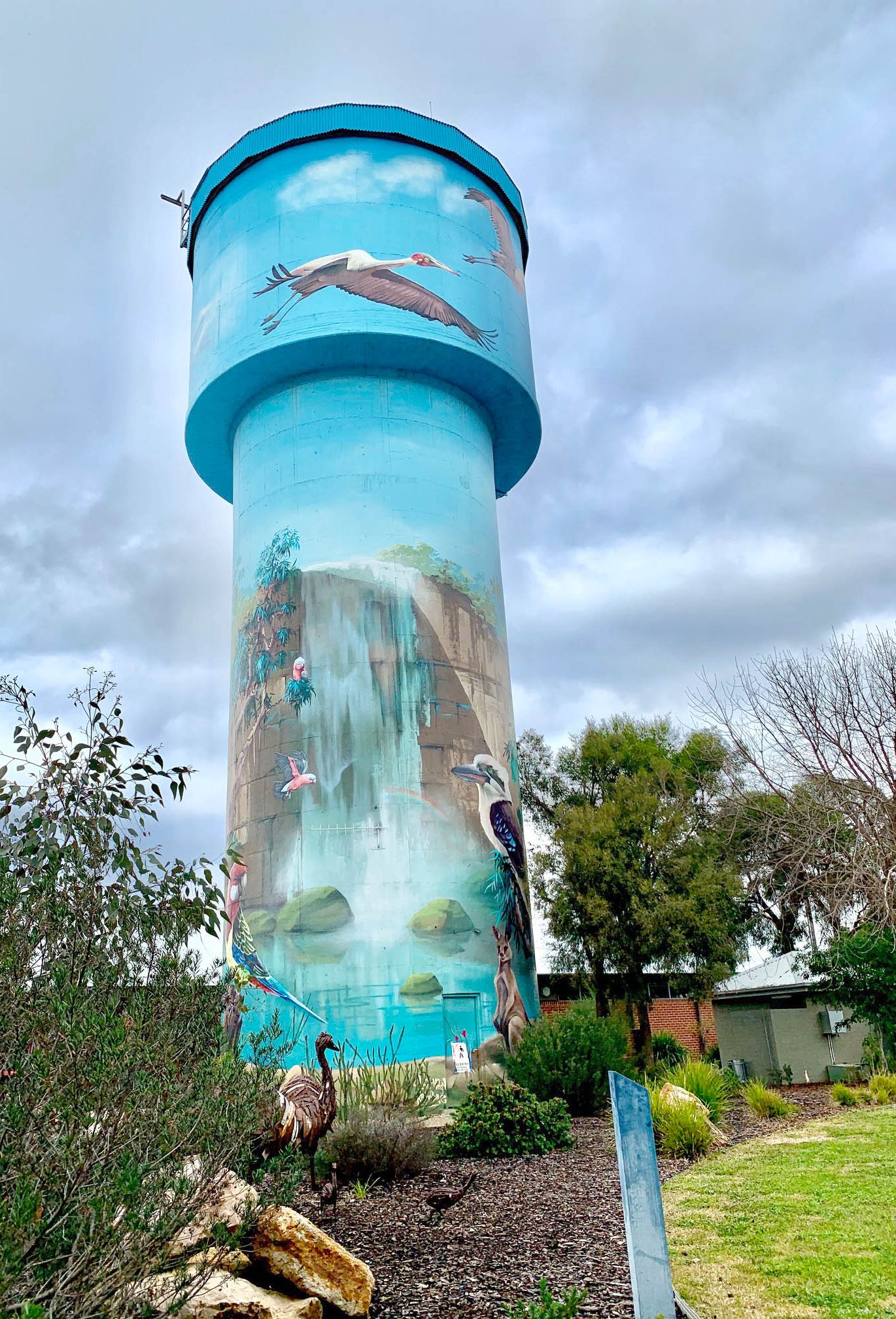 We booked directly with the country pubs and motels, and encourage everyone to do so.  A lot of the towns had a tough time with drought, fires and now COVID, so we spread our money around the town to help more people. Chatting to the locals gives you great insight into the area, and the  Visitor Centre is great for the lowdown on sites to see, road conditions, what’s open, farm trails, local markets and where the best coffee is. You’ll save lots of time, and get valuable ideas including this water tower.

I had forgotten how small a country town can be. The centre of the town usually fits in a few blocks along the main street with the Royal, Commercial, Grand or Railway pubs on the corners. Nowadays there are fewer pubs and much more diversity. Cafes, restaurants and markets reflect more variety and local produce is prominent. The shops are limited, but they are treasure troves to explore, and we sampled the bakery delights every morning. The historic Gundagai bakery had the best finger bun I tried, and Hay won the sausage roll award. 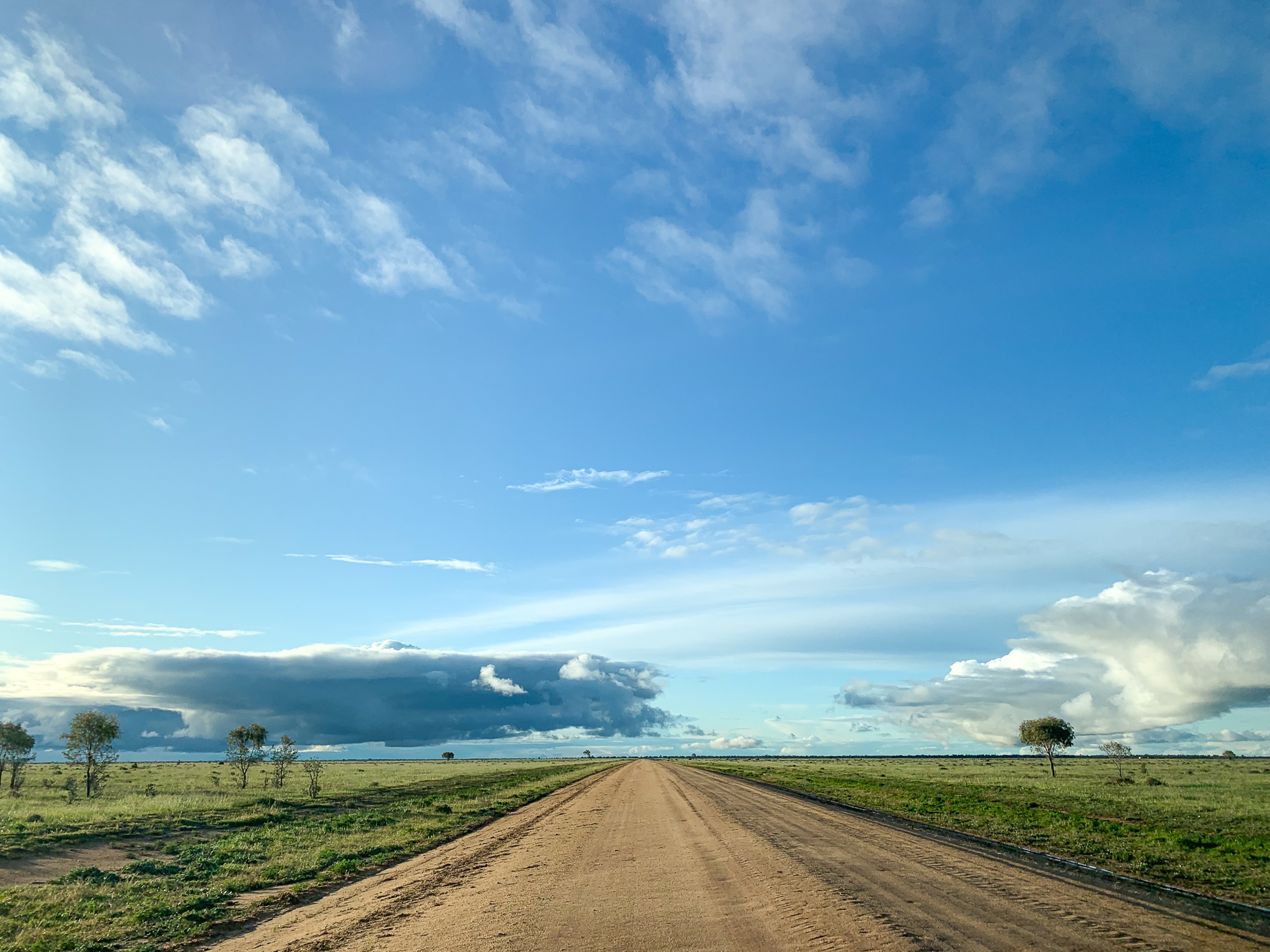 While the towns we visited were smaller than I imagined, the roads are longer and the country is bigger… and even more beautiful. I’m excited by the adventure off the tourist trail, so as we travelled we took the backroads. We pottered along and stopped when the views demanded it.

Driving across the flat expanse of the Hay Plains was one of the most surprisingly stunning 200km I have ever come across.

This ancient lakebed is one of the three flattest places on the planet – Uyuni and Sahara are the other two if you’re wondering – so the sky is bigger here than anywhere else on dry land.

The sky starts at ground level and stretches all 180 degrees from east to west and north to south with almost no interruptions. The vastness is emphasised by a single rogue tree that appears on the horizon from about 7km away. 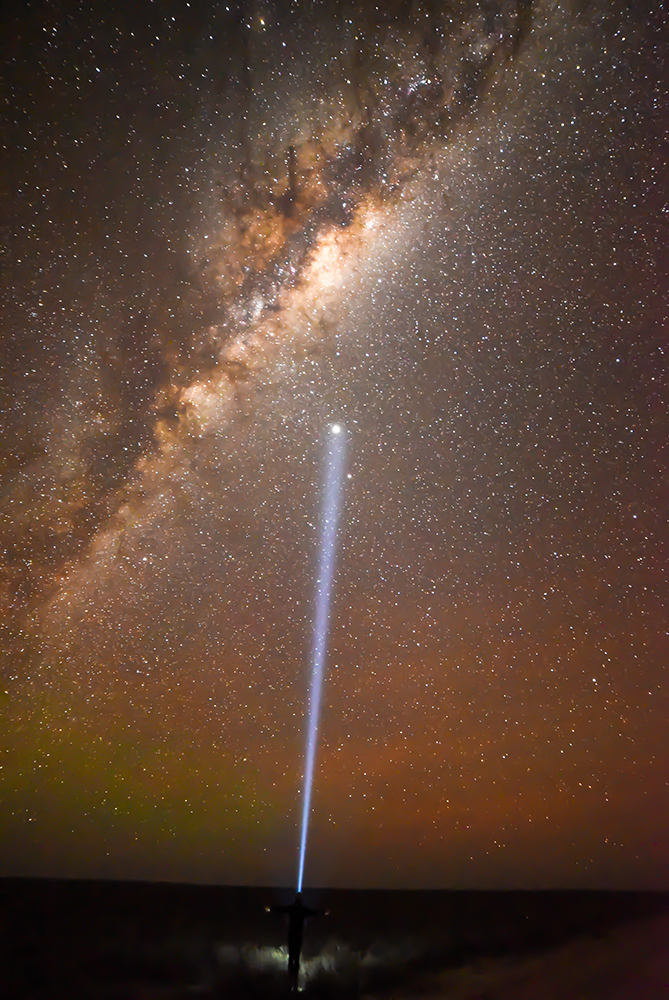 Some people are bored by the emptiness of the countryside… but for us, it was a powerful vacuum. We were pulled into the void, often stopping in awe and wondering how there could be so much to see when we were looking at nothing. It was the unexpected icing on the cake of our NSW road trip.

The Hay Plains is a drive that you will either love or hate… and I know where I stand.

We saw the Murray and Darling Rivers meet and discovered some very impressive native dinosaurs in Wentworth. It’s hard to imagine how busy it was when 200 boats ruled the rivers in the gold rush days. It would be a stark contrast to the police patrolling the border today.

We were blessed with some cloudless nights, so we could see the whole sky lit up. Each night we’d drive beyond the town lights and look up to the sky. We could see the whole Milky Way and pick out planets with the naked eye. With no one else around, it felt like we were in our own little world.

As we headed to Mungo National Park, we finally hit the red dirt of outback NSW. This desert is home to the oldest human history outside of Africa, and it’s there to be discovered in our own backyard.

We wanted to go beyond the tourist fences, so we booked an Aboriginal Discovery Tour where our guide, Lance, brought the incredible history of this place to life. Lance showed us 20,000 year old footprints, explaining which ones were the hunters, the mother carrying a baby, and even the cheeky child running away.

We stopped at some exposed teeth in the sand, which turned out to be a 20,000 year old wombat. Lance explained the dunes are moving 3.5m per year – a result of Europeans cutting down the trees since their arrival in the early 1800s – and over time the remains will be reburied further into the dunes. Those same moving dunes also revealed Mungo Man and Mungo Lady, two of the world’s most important human remains and the oldest burial rituals ever found. They date back over 40,000 years. 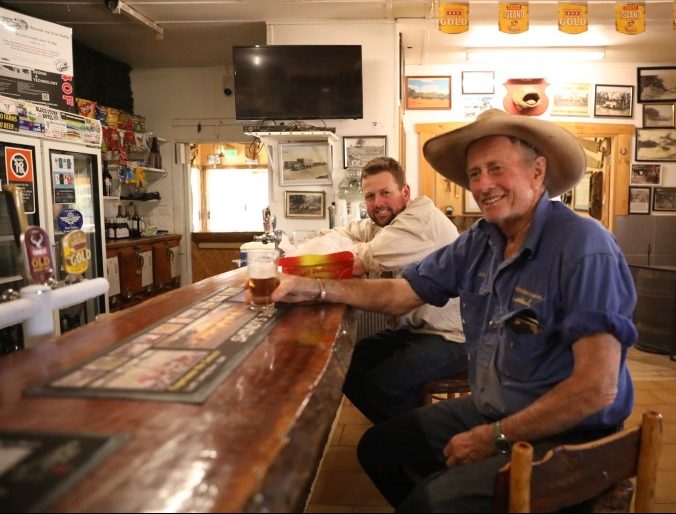 Pizza and a pilgrimage

Mungo was where we started the journey home. We continued across more dirt to the Homebush Pub, where ‘Nugget’ made us one of his pizzas. It’s a shame we don’t live closer, as we would be regulars if we did! The pub is so famous that the locals call the area Homebush, after the pub, instead of Penarie, which is where the map says it is. Beyond Homebush we were back on bitumen, and heading to our own little Italy, Griffith.

The 13yo asked if we were going to a Mafia restaurant as we ventured downstairs to a loud and dimly lit room. The mural walls, rich Italian flavours and enthusiastic conversations definitely made us feel like we had stepped into Italy. Coffee and pastries from Bertolo’s in the morning really cemented the feeling.

As a cricket tragic, I had to call in to Cootamundra – the birthplace of Don Bradman. It wasn’t a planned stop, but that’s the beauty of a NSW road trip – there’s so much to see and the road is open to explore.

We covered over 2,500km in our six days. And on the final drive back, we started planning our next road trip. The 13-year-old had only one request, “Can we go somewhere warm next time?” So, our next road trip will be to the north east, to experience the warmer side of NSW.”

Plan your own road trip

This is my map, a great route for a 6-7 day trip, and easily extendable for longer trips.

We are passionate about travel off the tourist trail. We can help you find the quirky spots and the treasures that await on your own NSW road trip.

Contact us to start planning your trip or learn more about our travel NSW 4WD tours.