See the world at home:
Unique places in Australia to rival the world

I was chatting to a client a while back about the amazing Uyuni Salt Flats in Bolivia, and he casually mentioned, ‘they sound like Lake Tyrrell, just a bit bigger.’

Uyuni is the largest salt flat in the world. It is 50 times bigger, 4000m higher, 100m deeper than Lake Tyrrell, but apart from those few differences, they are similar.

Seeing as we have plenty of time to travel Australia, we started thinking, where can we travel in Australia to see similar places to things overseas.

We came up with plenty of ideas to start a conversation and consider when planning to travel Australia. Some are currently out of reach, but they’re much closer than their overseas rivals.

Let us know what other ones you think of. 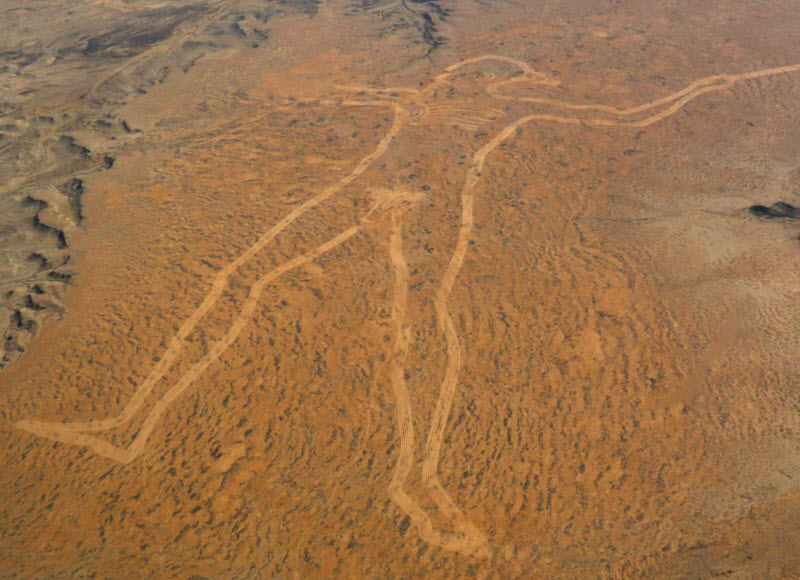 Mysterious carvings in the desert

The Nazca lines in Peru draw people from all around the world, keen to tick the mysterious carvings off their bucket list.

Many of those travellers have probably never heard of the mystery Marree Man tucked away in a remote South Australian desert location.

The Marree Man is a 24km outline of an Aboriginal warrior, who was discovered in 1998 by a pilot flying over the area.

His origins are unknown, which makes him all that more intriguing. More than an incredible sight to see, the Marree Man is also the world’s largest work of art. This is truly one of the most unique places to visit in Australia.

If you want to add the Marree Man to your list, we can organise walking or touring trips that take in this incredible carving and all the highlights of South Australia and The Flinders Ranges. 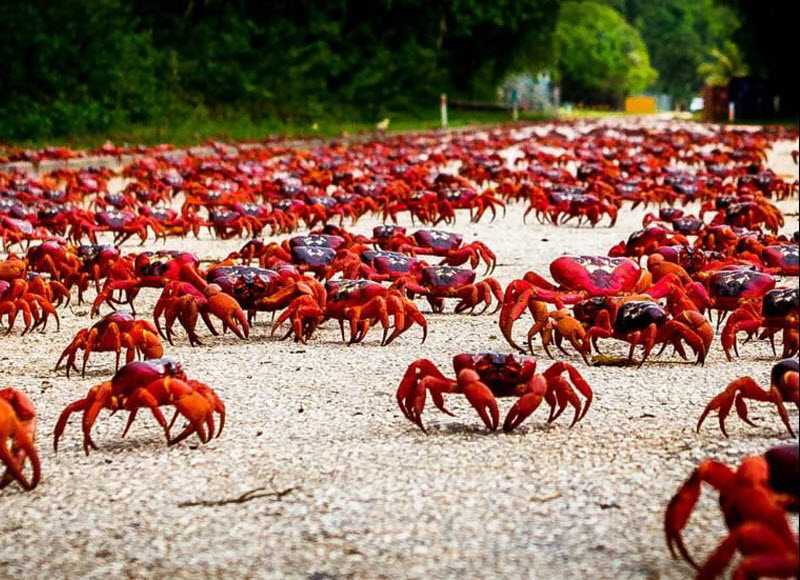 Wildebeest in Africa… or red crabs on Christmas Island

Arguably the world’s most famous animal migration is the two million wildebeest and zebras that cross the Rift Valley in Kenya and Tanzania as they follow the rains north, seeking the fresh grass they bring. They are elusive and hard to track… but when you do see them it is majestic.

But did you know that the largest animal migration happens right here in Australia?

It has been described by Sir David Attenborough as “one of his greatest TV moments”… and Christmas Island’s mass red crab migration is certainly something you should add to your bucket list. The breeding journey of 50 million crabs is one of the most incredible natural occurrences on Earth.

The event usually happens in October or November, but sometimes as late as January. The male crabs lead the way from the forest and march to the sea to breed, picking up females along the journey. The palm-sized creatures cross roads, rocks, creeks and beaches.

Sadly, most years, none of larvae survive, eaten by fish, manta rays or whale sharks that come by for the annual feast. However, thanks to the wonders of Mother Nature, every five years or so a huge number of crabs survive, ensuring the red crabs – and their migration ritual – continue. 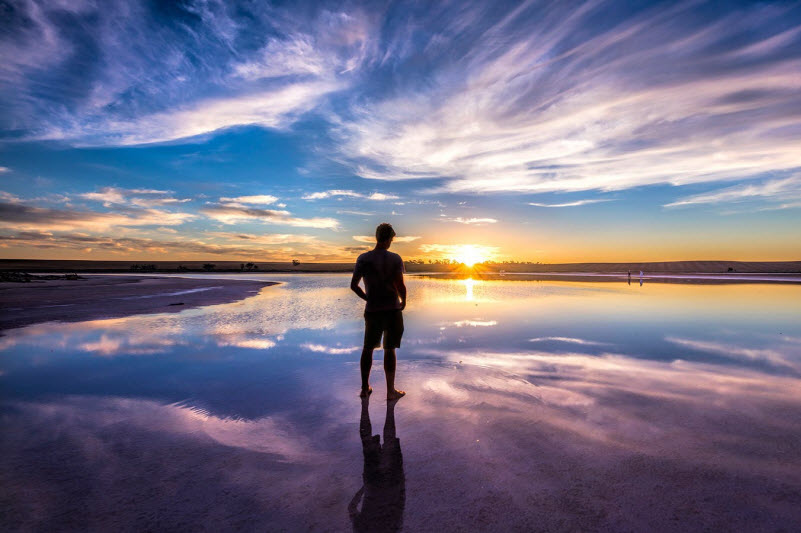 Uyuni is the largest, highest and deepest salt flat in the world at 10,000sq km, 4,300m high, and 120m deep. It is a huge expanse of salt and sky, where size, perspective and distance are all an illusion. Add a thin cover of water, and sky and land become a mirror of each other, which is phenomenal to see and mind boggling to experience.

While Lake Tyrrell can’t match Uyuni in size, its remote location and lack of light provide the perfect setting to see the elusive ‘endless sky’, where the still water is a perfect reflection of the sky.

Lake Tyrrell is dry most of the year… but it transforms into a natural mirror when shallow water covers it, usually between May and October each year. You’ll find it 200km south of Mildura. It may only be a tiny sample of Uyuni… but it’s another one of those unique places to visit in Australia, waiting for us in our own backyard. 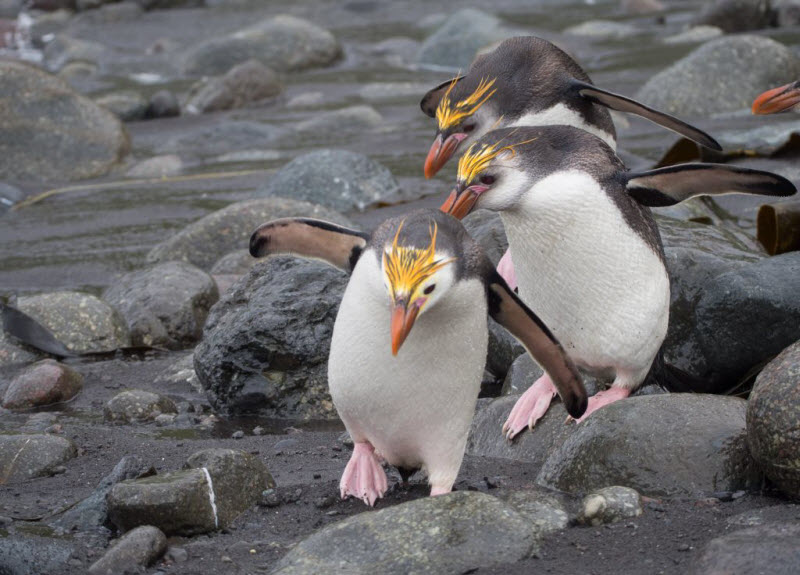 The Subantarctic Islands of the Southern Ocean are like diving inside your own David Attenborough documentary. They are incredibly isolated, pristine wildlife sanctuaries with almost no human settlements.

South Georgia is considered the icing on the cake of an Antarctic Expedition. Spectacularly beautiful and isolated, the island is nearly 2,000km from the bottom of South America. It’s 165km long with a spine of mountains and glaciers and is home to millions of penguins, seals and birds.

What you may not realise is Macquarie Island is recognised as one of ‘the most important and significant natural habitats’ on the planet. They have the highest World Heritage, conservation and protection status. In 2013, introduced pests were eradicated, and nature reclaimed her paradise. Animals and birds are breeding in record numbers and vegetation is slowly covering ‘our’ tracks.

Macquarie Island has similar sized wildlife populations as found in South Georgia and also has its own unique endemic species, including Royal Penguins, only found here. This has led the island to be called ‘The Galapagos of the Southern Ocean’. 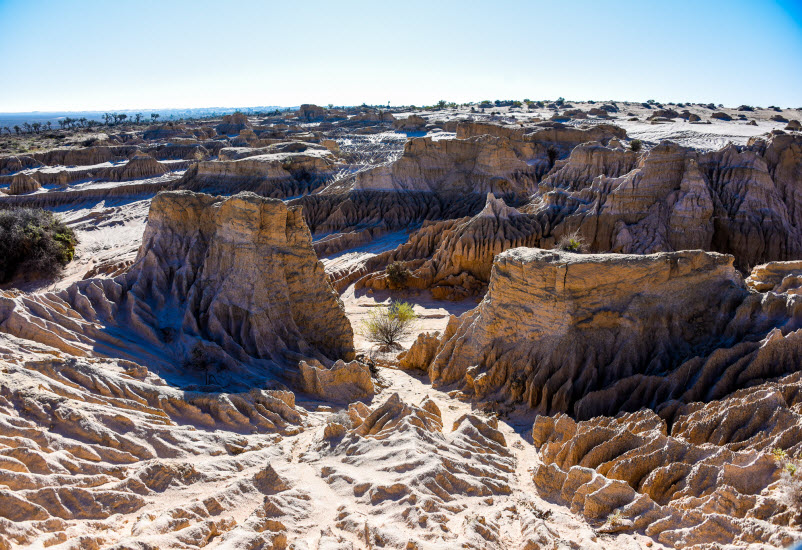 You could visit Africa to see a burial cave near the village of Taforalt in Morocco with human remains dating back 15,000 years.

Or you could head to Europe into a narrow cave in Somerset that has been identified as the oldest in Europe, dating back to just after the last ice age, 10,000 years ago.

Or you could save yourself an airfare and several days and head to Mungo National Park instead. The world’s oldest human burial rituals – dating back over 40,000 years – have been found here, and they’re definitely one of those unique places to visit in Australia that shines a light on the incredible history of our country.

In the 1960s, Mungo attracted attention for its eroding landscape and fossils. In 1968 a scientist found some burnt female bones. In 1974 an almost complete human male skeleton was found. These became known as Mungo Lady and Mungo Man. In 2003, scientists named Australia’s Mungo Man as the world’s oldest human ritual burial and Mungo Lady as the first known human cremation.

Humans have lived in Mungo National Park for over 45,000 years: that’s more than two ice ages. It’s an incredibly beautiful window to our past and a huge vault of information to help guide our future, too. Our travel NSW 4WD trips all visit Mungo National Park. 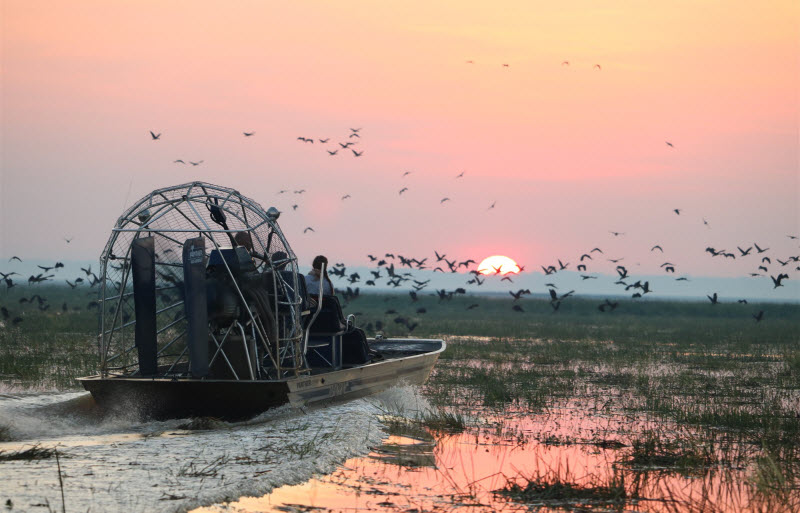 Arnhem Land remains one of Australia’s most untouched and diverse areas, with a variety of mind-blowing landscapes. Indigenous guides will share their culture, stories and knowledge with you… and – much like the Amazon – the insects will really test your patience.

Like the Amazon, you will find a range of retreats and lodges in Arnhem Land. They are immersive and the perfect escape from the world. Be prepared for the dry heat… and stay out of the water – the reptiles aren’t as friendly here as they are in the Amazon. 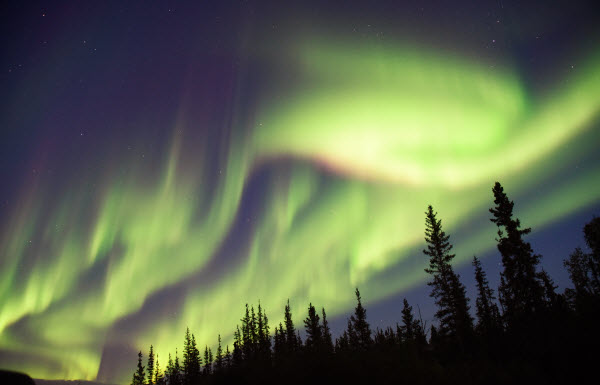 The Aurora can be seen in both hemispheres, Aurora Borealis in the North and Aurora Australis in the South.

In Canada, Iceland and Scandinavia you can stand right under the Aurora belt from August to April and be almost guaranteed to experience the amazing sight of the cloud-like colours dancing across the night sky.

The Southern Aurora is visible from Tasmania and southern New Zealand from Apr-Aug, although they are not as strong or as predictable. Our advice, if you really want to see them, head North. 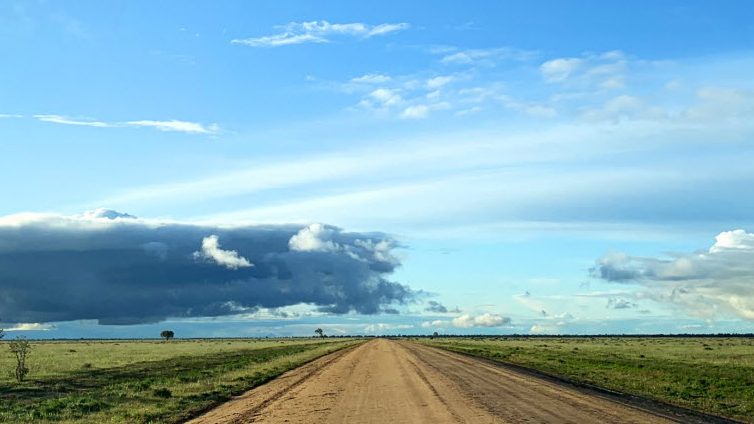 This ancient lakebed known as The Hay Plains is one of the three flattest places on the planet – Uyuni and Sahara are the other two, if you’re wondering – so the sky is bigger here than anywhere else on dry land.  Our co-owner Rose, drove across them in July. ‘The sky starts at the ground and stretches the full 180 degrees in all directions.  We were entranced, wondering how there could be so much to see when we were looking at so little. It was the unexpected icing on the cake of our NSW road trip.’

Can you think of more ?

Can you think of more things we have here that we usually go overseas for? Let us know what you come up with.

Contact us to start planning your Australian travels to the amazing destinations we have waiting for us in our own backyard.